This winter my husband and I decided that it would be fun to invite some of our friends over and celebrate in honor of the olympics, just with much more focus on alcohol than the actual olympics.

Some people only could only stay for one day of events, but the real troopers made it through the whole weekend. We played beer pong, flip cup, bags, drinking jenga, baseball...who even knows what else.

Sara and Kate even took it to the next level and dressed up in costumes for the event and did costume changes as the nights progressed. Kate's were actually themed to the olympic events, like swimming and Jamaican bobsledding. Sara decided take a different approach and be a banana-representing a country that likes bananas, and a pirate-representing the ocean, lol.

Sara and Kate probably "had the most fun" at the events because our little Kate ended up making out with two different people in a matter of minutes and not realizing that three of our friends were even there until she saw pictures of herself with them the next morning (They were there for several hours). Sara did the same and she actually had a twenty minute convo with one of them and didn't even remember they were there or ever meeting them. One of Kate's make out sessions did result in $90 of free taco bell for all of us, so I would say that one was well worth it, she may not have said the same the next morning ;/

Sara took it up to the next level of drama and was yelling at me and crying at 3 am, "You don't have any beds for me!!!!" at the top of her lungs over and over as Kate is curled up on the floor in the fetal position not knowing what to do about the situation. Sara at this time was in fact sitting in a bed, as she was the only one who actually got a real bed in our guest room. My special little friend was so blackout that she didn't realize she was in fact not being neglected and was sitting in a bed during her fit of panic. 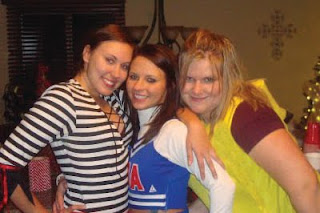 Somehow they got me to play along in their dress up too! Oopsy.

Happy Thursday!
xoxo
Kelly
Posted by Kelly and Sara at 10:12 AM